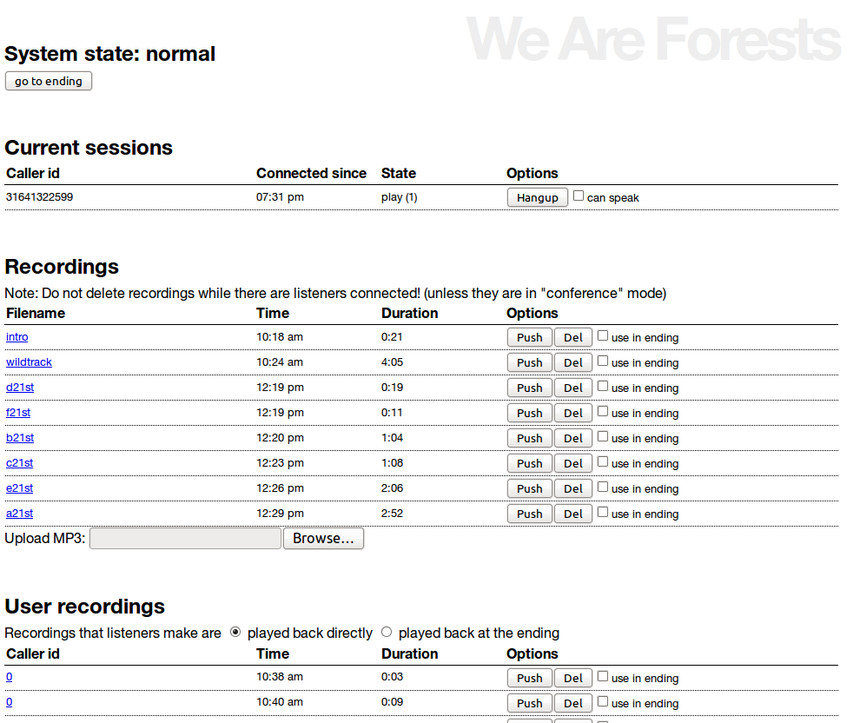 The web interface for the "conductor"

Hacking Asterisks for We Are Forests

One Friday night at an art exhibition opening at Arti. Luis Fernandez came up to me saying “Hey, you know something about asterisk, right?” – not something a random art exhibition visitor asks you – and proceeded to introduce me to Duncan. This opening line immediately got my attention, and Duncan proceeded to tell about his project.

We Are Forests is a new mobile sound work being developed by Emilie Grenier and Duncan Speakman, and is the first collaboration of these two artists, who both have a history of making sound-based works. With Duncan's work rooted into scripted, narrative performances and Emilie more into user-generated content, We Are Forests combines these two approaches in a sound performance of about 30 minutes for 10-20 active participants.

When a caller connects to the system, either by dialing in or by the system dialing them, the application creates a “session” for the channel that has connected. This session has its own state, which is shown below: 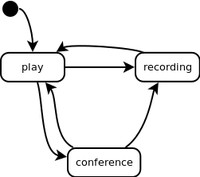 The “play” state means that the user is listening to a recording (either pre-recorded or a recording by another user). He starts in that state, because when dialed in, the first thing you always hear is the introduction sample, explaining the performance's working and setting the atmosphere.

Every caller-session has a queue, and, when users are ready recording messages, or the “conductor” feels like it, samples are pushed on to each session's queue. (The queue is a priority queue, with the samples pushed by the conductor taking priority over the user-generated recordings.) Samples are always heard in its entirety, and the next sample begins when the previous has ended. At any time, users can press “1” to start a recording. After hearing a short message and a beep, they can record their own message, ending with pressing “1” again.

Besides adding the conference room, the second iteration of the project added a real-time web interface to monitor the state of the application and of each caller. 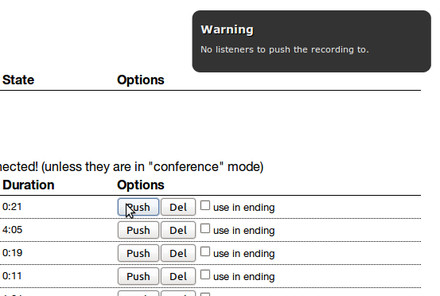 Nifty realtime notifications
This web interface is designed for use by the conductor, and sports the following features:

This last feature, dialing a list of numbers to start the performance, has been put in to allow people to participate without them having to pay for the phone costs.

By the way, the software is open source, released under the MIT license, and is available on Github. There are two repositories there, but the “weareforests” is the main repository, containing the program logic based on the Sparked framework (more on the technologies used in a next post!):

All in all, the system as it works now is fairly complete and I hope that the first test, which is tomorrow in the great market hall in Budapest, will go well! And a thank you to NIMk, for supporting this amazing project!